Here’s why you’re not going to stick to your new year’s resolutions. 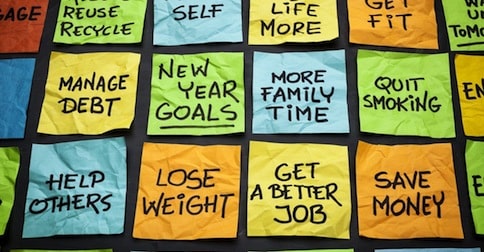 A handful of New Year’s Days ago, I had a friend resolve to give up smoking. She told me she felt prepared mentally and physically to really make it happen this time.

She made it three days.

Granted, resolving to give up an additive substance like nicotine is certainly different from making a resolution to hit the gym more often. But there are lessons you and I can learn from my friend’s failed bid at kicking the habit to help ensure we aren’t indulging in a King Size Snickers bar by January Fourth.

Here are the top five reasons she didn’t stick to her resolution – and the reasons we could fail to stick to ours.

There is strength in numbers. There is accountability for your decisions and your actions when you team up with others on a journey like this. She thought she could tackle it by herself and found out quickly that she couldn’t.

2. Her goal was greater than her willpower.

Her intentions were good and her goal was lofty. Giving up cigarettes cold turkey is a high bar to set. Likewise, setting a goal like “lose 50 pounds” is pretty vague and lofty. An endgame – a vision – is great, but let’s establish achievable benchmarks and let the losing take care of itself. How about a resolution of “reducing daily calories to 1250” or “spend 30 minutes on the treadmill 4 days a week.” Do that and watch what happens!

3. She threw in the towel too quickly.

Despite my consoling – and cajoling – she gave up on her resolution and on herself as soon as the first cigarette of the new year touched her lips. Learn from her mistake here. One bad day at Applebee’s doesn’t have to spell an end to your resolution. Refocus, rededicate and get back to work!

4. She wasn’t honest with herself.

Don’t worry, I’m not being mean, she’s admitted as much herself. When my friend looks back on things, she says that she wasn’t prepared for the work it was going to take to make a life change. She further explains that she made the resolution because she felt she needed to – she felt obligated to do it for others, not for herself. If you’re ready to lose weight on your terms, no one else’s, then you’ll likely have better luck than she did.

Take some time before January First and formulate a plan. Consult with your doctor or with us here at Mediplan and create a strategy to reduce your caloric intake and to increase your activity level in order to drop pounds safely and permanently.

Learn from my friend’s mistakes. Don’t repeat them. I sure hope she doesn’t read this blog…